Once you have registered as part of an EM-followup team, you have access to the LIGO-Virgo event database, GraceDB, containing probability sky maps and false alarm rate estimates that you can use to plan follow-up observations to a GW event. This database stores the information in the alerts sent out via GCN, and more. GraceDB also manages a lot of test events and mock (or "MDC", for Mock Data Challenge) events that can be used to practice future EM follow-up of real events -- as well as sharing information with other astronomers. As of this writing (May 15) mock events are being emitted, one every 6 minutes, to allow astronomers to test their reception and interpretation of the data about the event. Lets start by looking at some test events. From the GraceDB search page, search for "Test MDC":

Then you should see a table of events, and in the first column all the ID's start with the letter 'T'. Also in the table is a field indicating the instruments involved in the event (H1 means LIGO Hanford Observatory, L1 means LIGO Livingston, and V1 means the Virgo observatory in Italy). 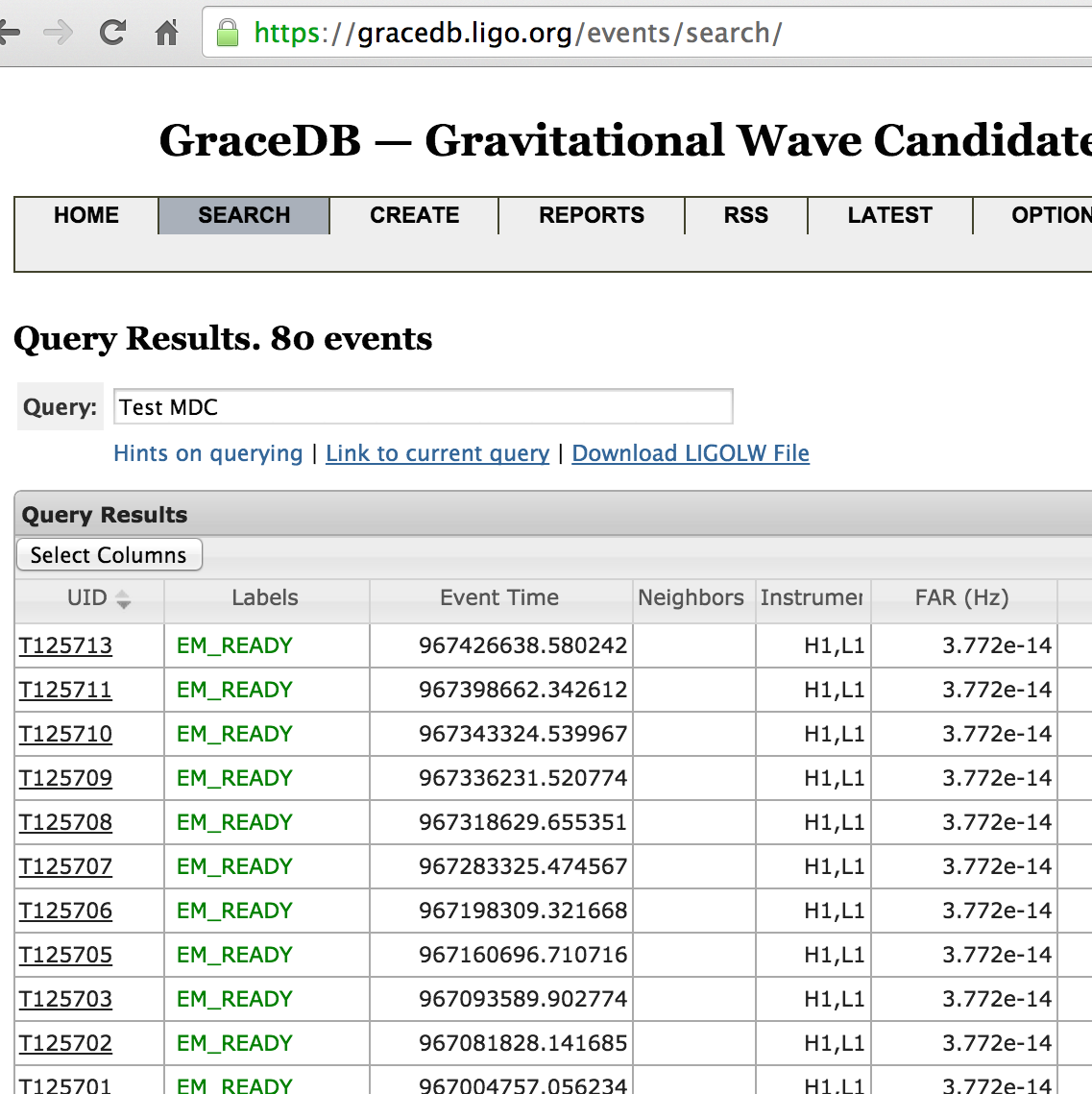 Also in this table is the "FAR" which means False Alarm Rate, measured in Hz, the rate at which signals like this might come from random noise. The inverse FAR is a measure of significance of an event, for example a FAR of 3.2e-10 Hz means once per century. The ID for an event is called the UID or the "GraceID". It consists of an upper-case letter (the prefix) and a number (currently 6 digits). The most relevant prefixes are: When an event has a tag "EM_READY", it means that it is ready for electromagnetic follow-up by astronomers. Clicking on one of the IDs in the first column of the table above leads to something like this: 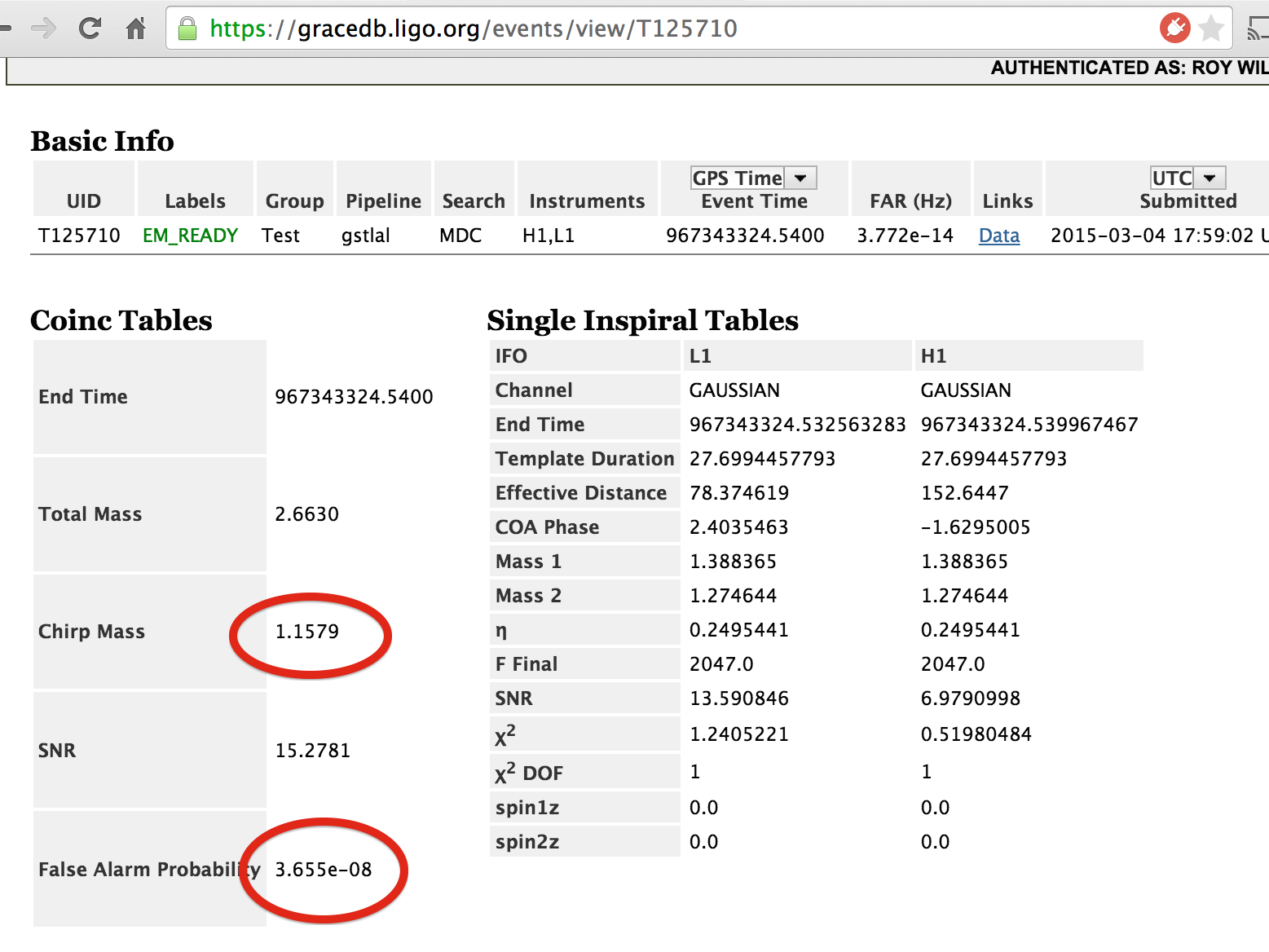 The circled information is the FAR, as explained above. In this case the (simulated) event is a CBC (Compact Binary Inspiral), and you can see the "chirp mass", a particular combination of the two masses that determines the chirp rate to lowest order, in units of the solar mass. Looking further down that page, you will see some sky localization images, and links to the skymap files (either .fits or .fits.gz): 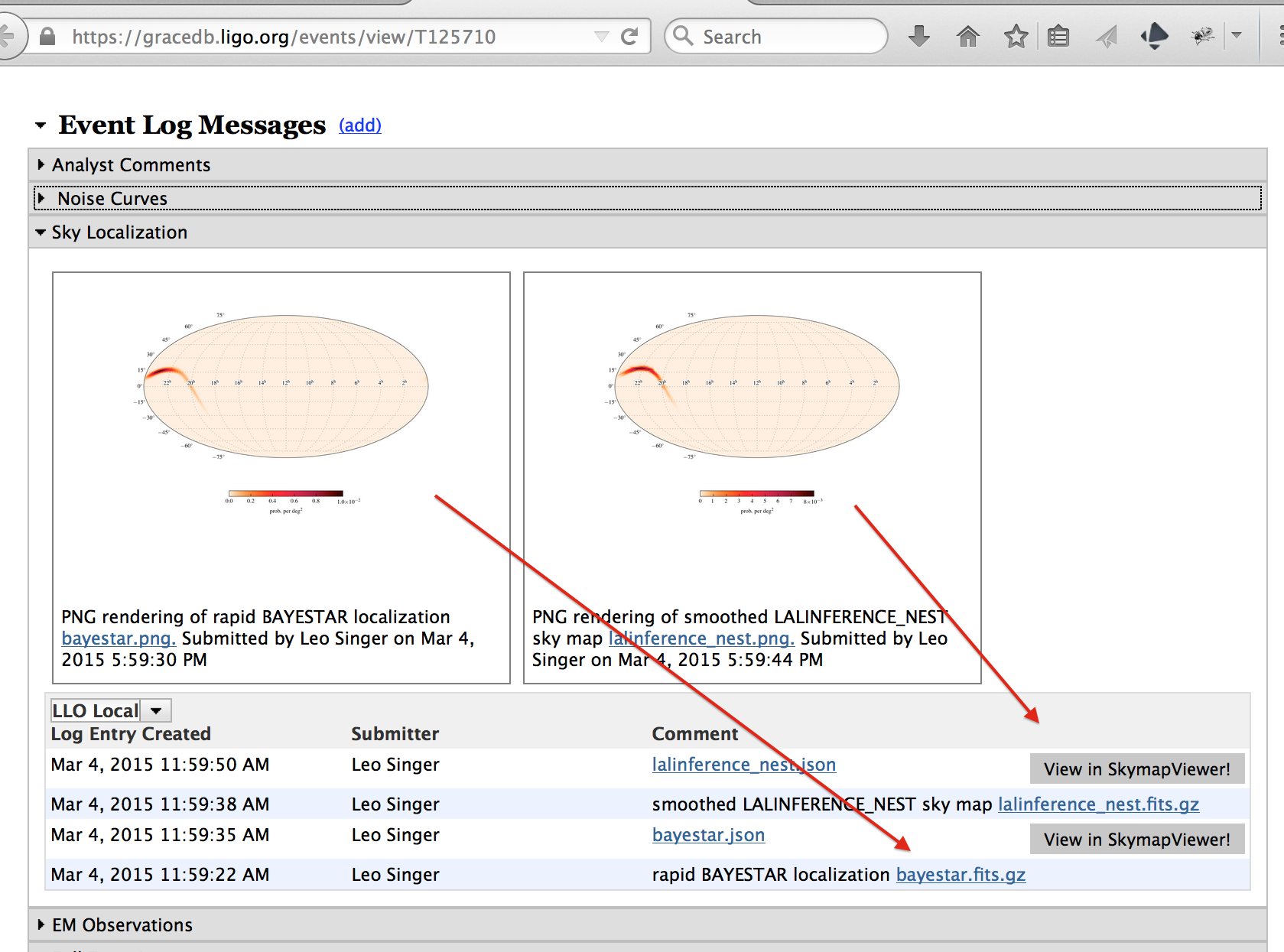 On the GraceDB web page, sections can be opened and closed by clicking on the section header -- for example in the above image, the sections are: so if you do not see the sky localization, make sure to open its section. The sky map is the probability density map in right ascension and declination indicating where the source is likely to be. There are several flavors of sky maps produced by different pipelines. In general, a rapid localization is available within a minute or two of a detection candidate, followed by one or more improved localization skymaps a few hours later. There is also a button labelled "View in Skymap Viewer", which shows the skymap in an astrophysical context, with horizon, sky, sun, moon, milky way, and catalogs of galaxies, as an aid to planning follow-up observations. In the picture below, the skymap is annotated with likely galaxies and overlaid on the Fermi sky, showing the prominent quasar 3C 454.3. 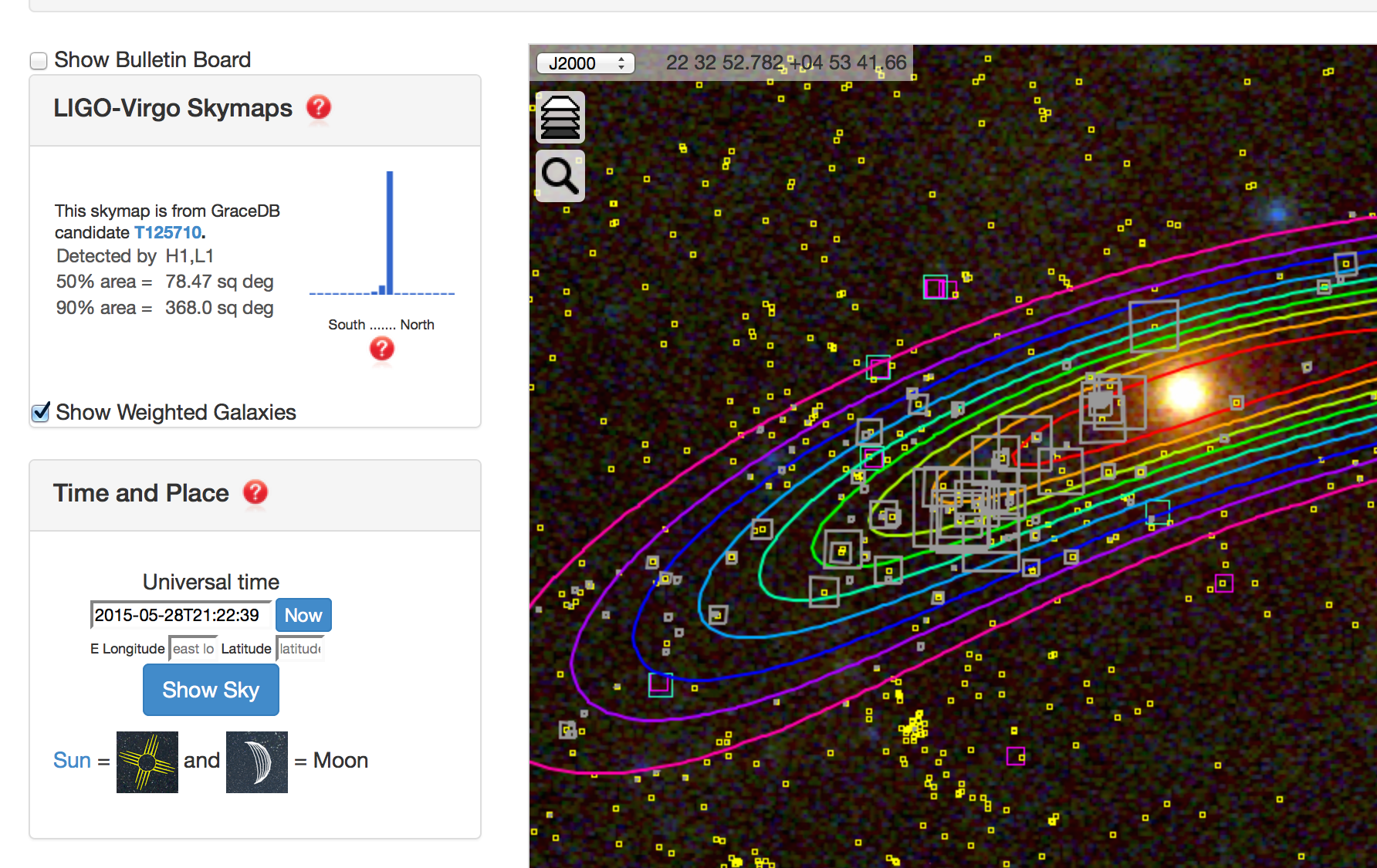 In the EM Observations section of the GraceDB page, astronomers can fill in where they have observed in the sky, within 12 hours of the observation, as agreed in the MOU:

This web form can be used to report one or many observation footprints. The RA and Dec fields are comma-separated lists of angles in decimal degrees, and the Start Time of each observation should be a comma-separated list of dates, each in the ISO6801 format, for example 2014-12-25T12:00:00. Each RA and Dec represents the center of the observed footprint, and the RAwidth, Decwidth, and Duration fields are for the extent of the footprints in RA, Dec, and time. These latter three can be comma-separated lists if the footprints are different sizes. -- RoyWilliams - 04 Jun 2015
Edit  | Attach | Print version | History: r10 < r9 < r8 < r7 | Backlinks | View wiki text | Edit wiki text | More topic actions
Topic revision: r10 - 2018-05-29, adminuser
LV_EM
Warning: Can't find topic LV_EM.WebLeftBarExample